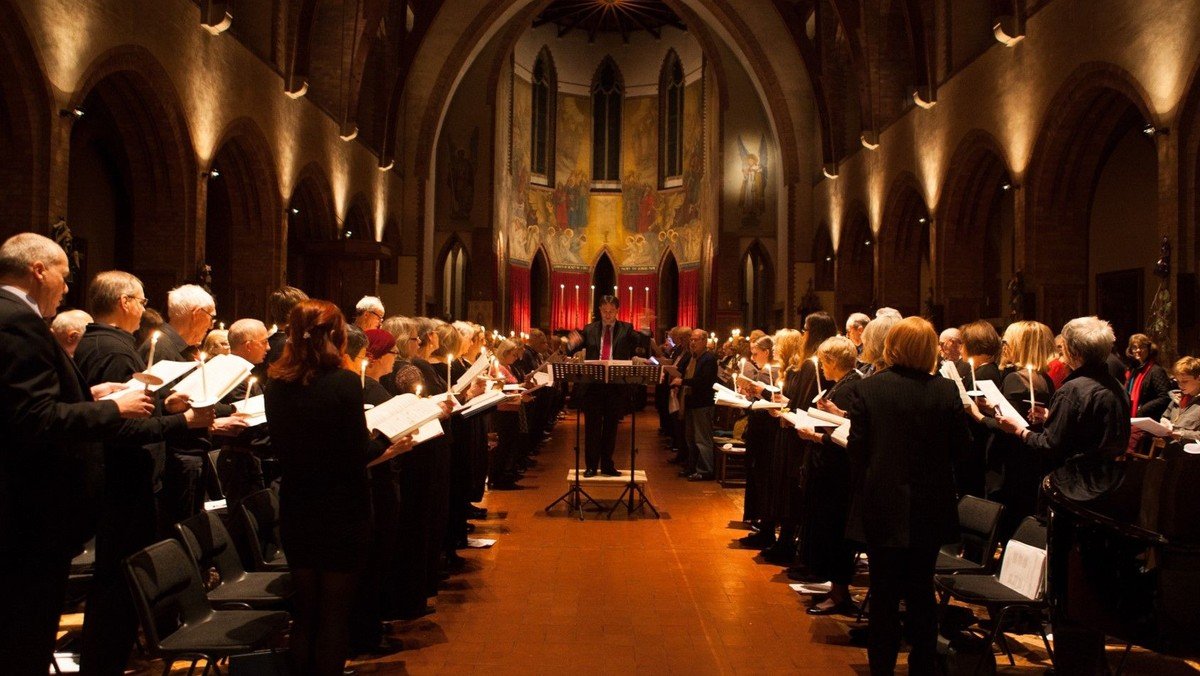 Since we’ve began to offer Choral Evensong & Benediction we’ve had several sermons on the meaning of Benediction. That’s important because it’s probably new to many of us. This Evening I want to look into the origins and significance of Evensong.

As you may know, I wasn’t brought up Anglican. I started to attend Evensong when I was about 17. At first I was puzzled by the choice of Scripture passages that are fixtures in the service. I’m talking particularly about the Magnificat and the Nunc Dimittis. I noticed these come from just one gospel and just one section of that gospel: Luke 1.46–55, and Luke 2.29–32.

If we had a brainstorm I suspect we could come up with great ideas for what Bible passages could be used as keynotes for services of worship. The New Testament has some great purple passages. St Paul’s hymn to love in 1 Corinthians 13, “Though I speak with the tongues of men and angels, but have not love….”? Or the ‘Christ hymn’ of Paul in Philippians 2 … “Let this mind be in you which was also in Christ Jesus? Or the magisterial prologue to the Gospel of John. “In the beginning was the Word.”

So why the Magnificat and Nunc Dimittis? The main idea in Evensong is celebration of the incarnation of Christ: God coming to the world in human form and living among people. The Magnificat announces Jesus the liberator, who turns the social order on its head, “He has put down the mighty from their thrones, and has exalted the lowly.” The Nunc Dimittis announces that Jesus is for everyone all over the world, “a light to lighten the Gentiles.” They set a profound context for worship.

I want to move on and say a bit about the origins of Evensong, how it came down to us.

1. Evensong has roots that go back to Jewish and early Christian worship. The Psalms were Jesus’ hymnbook. His first recorded sermon starts with a reading from Isaiah in what we call the Old Testament. The earliest Christians worshipped in the temple and in synagogues where the menu was Psalms, Scripture readings and Prayer.

2. The next layer is the Monastic pattern of services. Various shorter forms of these were developed for parishes and lay private devotions. I’ve produced an appendix with summaries of the old monastic pattern, Cranmer’s Evensong and outline of the 1662 Evesong.

Now the third layer. Enter Archbishop Thomas Cranmer, the person credited as being mainly responsible for our services of Morning and Evening Prayer. Thomas Cranmer (1489 –1556), was Archbishop of Canterbury in the reigns of Henry VIII., Edward VI., and Mary.

Cranmer’s big idea was making worship and daily Bible reading accessible to ordinary people, not just the spiritual elite like priests and monks. He didn’t start from scratch. The popular account is that Cranmer went up the Lollard’s Tower at Lambeth Palace and wrote all these services from scratch. In fact, sections of Evensong bears close resemblance to the Sarum (Salisbury) Liturgies, uniquely English-flavoured worship in Latin, created shortly after the Norman Conquest. There were other Latin liturgies in use before Cranmer: including versions used in Llandaff, York, Lincoln. The roots go deep into earlier history.

The old system of The Hours was undoubtedly beautiful but Cranmer saw three problems. 1. In spite of the beauty of The Hours, the system didn’t work for busy people. 2. Under the influence of the Reformation, Cranmer came to believe that not enough Scripture was heard during worship. 3. And finally, existing worship was in Latin. That signalled that worship was only for an educated elite.

By the way we have relics of the old Latin in the titles of the psalms and some of the Canticles in our 1662 Prayer Book.

So how did we get Evensong? Well, Cranmer welded together Vespers and Compline, the two last services of the day. The result, the earliest iteration of the lovely Service of Evening Prayer we are enjoying this evening.

It’s important to understand that it was not a mere translation from the Latin. Cranmer was a literary genius. And his structure is just as important as individual parts. Cranmer was author of many of the Collects, short prayers that are well worth memorising.

We only have time to examine Evensong as it left Cranmer's hands and appeared in the first English Prayer-Book, published in 1549.

One thing that’s striking is that it’s short. By contrast the 1662 service is wordier. It begins with the Lord's Prayer and like all in all the traditional offices it starts with The Lord’s Prayer said softly by the priest only. The same pattern operates at our 8.00 am Sunday Communion.

Then comes opening versicles and responses, taken almost word for word from the old services, mainly the Sarum Hours.

Psalms and Bible readings form the bulk of the service. Cranmer invented a lectionary of daily readings. I’m always amused when people from churches with just one bible reading in their services try to tell me they are more biblical than traditional Anglicans.

The Magnificat came from Vespers. In Evening Prayer it forms a link between the Old and New Testament readings; Nunc Dimittis came from Compline, and so did the Creed.

The second Lord's Prayer plus concluding versicles and responses were taken straight from the old services. Then two Collects, the Collect of the week, the second Collect were from Vespers. Finally, the third Collect, "Lighten our darkness" was from Compline.

So there we have it. Choral Evensong is growing in popularity, nationally 60% growth in attendance in 10 years

- Evensong has a deep history that connects past and present

I want to end with a comment. From time to time people ask me for ideas on how to enrich their spiritual life. Well, here’s one. Consider making it a habit to say Evening Prayer every day.

- Pithy prayers that can easily learnt by heart

- A gentle, quiet set of meditations that take us to the heart of our faith but yet the content is simple and undemanding

EVENSONG – HOW IT DEVELOPED

The Eucharist when held was likely to be fitted in after noon.

EVENSONG (1662) · A spoken penitential introduction, including the General Confession and the Lord's Prayer. These are frequently omitted at choral Evensong. · Preces – a series of verses and responses including the Gloria.

· A portion from the Psalms, with the Gloria. · Two lessons (readings) from the Bible. The first is usually taken from the Old Testament and the second from the New Testament. · Two canticles, one after each of the lessons, usually the Magnificat and the Nunc dimittis, with other options, each concluding with the Gloria. · The Apostles' Creed, often chanted. · Several prayers and responses, often chanted. These include the Kyrie eleison and the Lord's Prayer, followed by several verses and responses ("suffrages"), and the Collect of the day and additional Collects. · An anthem following the third collect ("In quires and places where they sing, here followeth the anthem", in the famous phraseology of 1662.