Jazz on the Lane Nights

We are excited to have launched a new series of monthly music events called "Jazz on the Lane Nights." These will build on the popularity of the Jazz on the Lane summer festival and showcase upcoming folk, jazz and Indy music artists in the beautiful setting of St Barnabas Church. The program will alternate between artists gigs and our famous “Sing-a-Longs.” 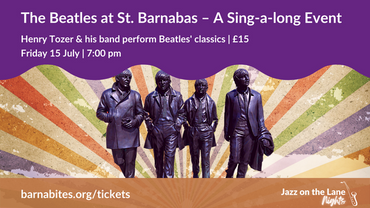 Join us for a relaxed and fun evening with Henry Tozer and his band as they perform Beatles' classics and songs for the audience to join, too! From 'Hey, Jude' to 'All You Need is Love', and 'A Hard  Day's Night' to 'Help', we'll be singing our hearts out to The Fab Four's songs of yesteryear.

"Henry Tozer is a singer, pianist and composer based in London. Originally from Devon, he was a winner of the BBC Young Composer of the Year and subsequently a Choral Scholar at Robinson College, Cambridge, where he read music. He performs across London as a singer and pianist within both the classical and jazz/pop spheres. Outside of performing, Henry leads workshops and choirs: he was Head of Vocals at the Twyford Trust and is the director of the Ealing Gospel Choir. Henry also gives private tuition. As a composer, his music has been featured in Hollywood soundtracks and he is currently preparing for an official release of his original compositions: cinematic, classically-influenced contemporary songs. Henry has an online following and a Patronage program where he shares more music. You can support him and learn more at henrytozer.com/patrons."